Do you want to listen to something good?  Put on Fleetwood Mac’s Kiln House from 1970.  It sounds great on an I-pod but I would advise cranking it on a car stereo for maximum righteousness if you can.  It’s a great sounding album and a wonderful piece of Mac history.  Fleetwood Mac was at a pivotal point in their career when they made Kiln House.  Their leader and founder Peter Green had just quit the band.   Green formed Fleetwood Mac in 1967 as an electric blues band.  A couple of years later he was gone. Between Peter Green’s original blues band and their eventual multi-mega-hit, arena rock explosion with Lindsey Buckingham and Stevie Nicks, Fleetwood Mac soldiered on through years of albums, tours and line-up changes.  Kiln House marks the beginning of that journey.

It turns out Peter Green was somewhat of a visionary.  In 1966, he had been playing lead guitar in John Mayall’s Bluesbreakers, backed by drummer Mick Fleetwood and bassist John McVie (Fleetwood was only in Mayall’s band for about six weeks).  Green decided to break off from Mayall and form his own band.  He admired his rhythm section so much that he named his new band Fleetwood Mac, from their names.  At first, he couldn’t even get both namesakes to join his new outfit.  McVie wasn’t up for leaving his steady gig with Mayall.  But Peter Green still went ahead and named his band Fleetwood Mac anyway.  Eventually, McVie did join the group and he never left.  In fact, decades after Peter Green was long gone, the rhythm section of Fleetwood and McVie remain the only consistent part of the Fleetwood Mac line-up on every single record.  The group’s sound evolved and evolved through many different songwriters and singers, but that groovy old rhythm section just kept on trucking, anchoring the band through it all. 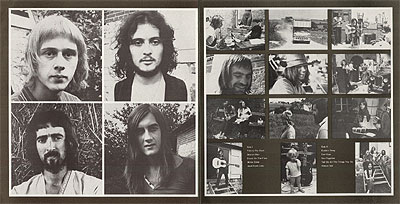 When Kiln House was made, Fleetwood Mac was a four-piece band.  With Peter Green’s blues revivalism and brooding narratives suddenly gone from the act, guitarists Danny Kirwan and Jeremy Spencer were responsible for singing and writing all the songs.  John McVie had just married the former Christine Perfect, singer and keyboardist from a band called Chicken Shack.  Christine wasn’t officially in Fleetwood Mac yet, but she drew the album’s artwork and played some keyboards uncredited.  You can hear her guest harmonies clearly on the song “Station Man”.  She had yet to step into her duties as the band’s principle songwriter and singer.  The songwriting of Spencer and Kirwan isn’t much to write home about.  Spencer goofs around with a fair amount of bogus English Americana on Kiln House.  There’s some 50’s rock nostalgia and faux-country mixed in to his folk-rock. Kirwan’s songs are more straight-ahead hippy blues-rock, sung with his sweet little angelic voice.  The jamming and riffing of the Peter Green Mac is still integral to several songs on Kiln House, most notably Station Man, Jewel-Eyed Judy and Tell Me.  But there’s a light heartedness to the heavy jams of the album.  Somehow, the whole informal mix of stuff just works.  At least it worked for the duration of the Kiln House album.  A few months after the record came out, Jeremy Spencer would step off of a Fleetwood Mac tour in Los Angeles and join a cult, never to return.  Danny Kirwan lasted for two more years in Fleetwood Mac before getting the boot.

One thing I really love about Kiln House is that its whole conception follows a model that no longer exists in the music industry and only really existed briefly:  You’ve got a band with no flashy front person and no hit singles on them.  They’ve got a following because they tour their butts off and they’re super-tight from playing a million shows.  So the record company pays for a bunch of hippies to hole up in a house in the country for a month or two and get an album together.  One of the guy’s girlfriends draws some loving, hopeful, hand-drawn hippy art for the cover.  The record comes out and the band goes back on tour.  The album doesn’t go gold, but the label doesn’t drop them.  You pick up the album somewhere, put in on, float away and listen to those hippies rock out.  Maybe you catch the band the next time they come through town and when the next record comes out you check it out and see if you like that one too.  It seems like that was a pretty good way to develop some really big talent for a while.

The Mac made five more albums for Warner/Reprise without a hit and moved to Los Angeles before busting out big with their 1975 self-titled album featuring “Rhiannon”, “Landslide” and “You Say You Love Me.”  All five of those early 70’s records are uneven, but they all have their moments and the groovy bass and drumming are the yellow brick road that runs right through it all.  Once Christine McVie’s singing and songwriting is added to the mix, you’re assured at least one or two gems per record and I enjoy listening to the evolution evident in the other stuff too.  Of those albums I recommend Penguin and Mystery to Me most of all, though I like songs on all of them.  I think Kiln House stands out as a little more special than those other transition records.  It’s feels fresh and free of the big league slickness that would follow.  Not that I don’t love mega-hit Mac.  Their famous records feature some of the greatest pop songwriting and recording craft I know of and the singing and playing on all of them is exquisite.  Rumours was my introduction to the Mac and I still listen to it all the time and marvel at its perfection.  Kiln House isn’t that kind of pop perfection experience.  It’s just a damn good sounding record by a damn good band, pretty early in their career.

In fact, Kiln House was just one in a slew of wonderful sounding records by damn good acts that Warner/Reprise released around the turn of the 70’s.  I’ve been meaning to ask a producer or an engineer what they think accounts for the amazingly clear and warm sound of so many of those albums.  They weren’t all made in the same studios or with the same musicians or engineers but they’re all great and they came out over the course of just a few years.  I’ll give you a few examples:

The Kinks Lola Vs. Powerman and the Moneygoround Part One

…They all sound really wonderful…and there are so many more…

Milton is a Songwriter and musician from New York.
View all posts by Milton →
This entry was posted in Uncategorized. Bookmark the permalink.